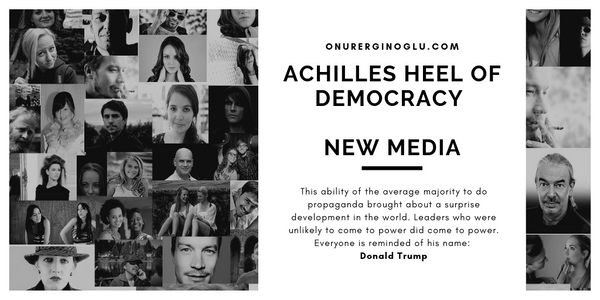 Statistical ratio of intelectuals in a society is similar in all nations. Intellectuals are in the minority in general, but their ideas are influential and they shape future of each country and the world.
The majority of each society’s population have average or low intelligence and therefore their influence is minimal. I will describe this group of people as the ‘average majority’ in the following paragraphs. This group of people is described as a group that belongs to a ‘mediocracy’.

I will talk about a dilemma in my article, which you may not have heard very often, and which may feel oxymoronic for some; that the new media order is a dangerous threat to democratic governance in terms of the progress that democracy has made so far.

As someone who has been working on new media in a number of avantgarde projects with my team for years, I will try to provide an analysis on the sociological effects of new media products.

Schools of thought that have high intellectual value have made huge contributions in developed countries in terms of democratic governance and rights and freedoms. They allowed for the building of more civilized, value based societies that protect rights and freedoms. With developed countries in the forefront, when we look at modern democratic societies, these societies have been led and guided by individuals with an intellectual calibre. There were even debates between the average majority and the intellectuals as to whether ‘a shepherd’s vote is equal to aa professor’s vote’, or whether those that represent the ‘average majority’ can rule a society that also has intellectuals, as part of the majoritarianism theory that argues that the majority regardless of intellectual level should have the say.

However, it seems that the idea that posits that the average majority should govern the society with their ideas, a political philosophy that hadn’t become very applicable for centuries, is seriously possible and plausible today.

How and in what way?

With the changes brought by propaganda in traditional media and new media’s digital progapanda!

I believe that this change is very important for the humanity’s future and the evolution of forms of governance. This is also the reason why I think democractic governments are in danger from now on.

The answer is simple, because TV, newspapers, radio stations and journals, traditional media’s means of propaganda, used to give space to the intellectual minority, rather than the average majority.

Political discussions on TV, columns and articles that appeared in daily newspapers were all in the hands of the intellectuals and the means of fake news, smear campaigns and propaganda tactics were very limited.

Surely this was the right way to go. İt was necessary for the intellectual minority to guide the less educated average majority for a sound governance to form.

What kind of revolution was this?

This allowed every individual to build a media outlet of their own on social media, and gave the average majority the tools and ability to be able to disseminate propaganda to the very same average majority.

Every individual is able to become their own media publisher, while more importntly, they are able to found groups with huge number of followers through their Twitter, Facebook and other social media accounts. They can thus disseminate their message on these platforms more effectively and without control.

As we have mentioned, the propaganda of the vast majority is more influential than the intellectuals’ propaganda. The reason is, there is a correlation between the publishers and those at the receiving end it terms of how they perceive life and their intellectual levels, which allow them to understand each other better and establish empathy, and as a result create a cultural synergy, as the people on both ends belong to the average majority.

This does not only create synergy, but also allow them to see the results of that synergy. What i mean is the engagement of those on the receiving end with the synergy they observe on social media, which increases the effects of the synergy exponentially with the viral aspects of social media.

This is defined as ‘learning of one’s strength’ in organisational psychology, in contrast with ‘learned desperation’. As a result, the average majority have learned strength and empowerment, and they continue to learn.

This group of people who can empathise and understand one another possess an influential digital propaganda system in their hands, a system that disseminates synergy much easier than intellectuals.
They can choose the most useful propaganda techniques and in addition to this, and in addition they can utilise more frequently, more dangerous forms of misinformation such as black propaganda and deception, and new platforms allow these news to be spread more easily. Because there are less and less red lines regarding virtue, self control and ethics.

This ability of the average majority to do propaganda brought about a surprise development in the world. Leaders who were unlikely to come to power did come to power. Everyone is reminded of his name: Donald Trump.

In a country like the US, which represents perhaps the most developed civilization in the world, the populist Donald Trump became the president. Today the majority of the mainstream American media, as well as intellectuals, artists, and opinion leaders slam Trump’s actions and harshly criticise him, but Trump knows how to consolidate his popularity and propaganda power through new media channels. Thus he created the case which became the basis of this article through populist rhetoric that understood the spirit of the average majority.

To recap, yes, indeed, humanity has come to this point through democratic election systems, in terms of rights and freedoms. However, this level of progress is being endangered today by digital propaganda means and channels, under the threat of ever strengthening power of mediocracy. Will democracy be able to protect itself from the populist waves of new media by updating and repairing itself, or will new media become the Achilles hill of a democracy of media mediocracy? We will wait and see.