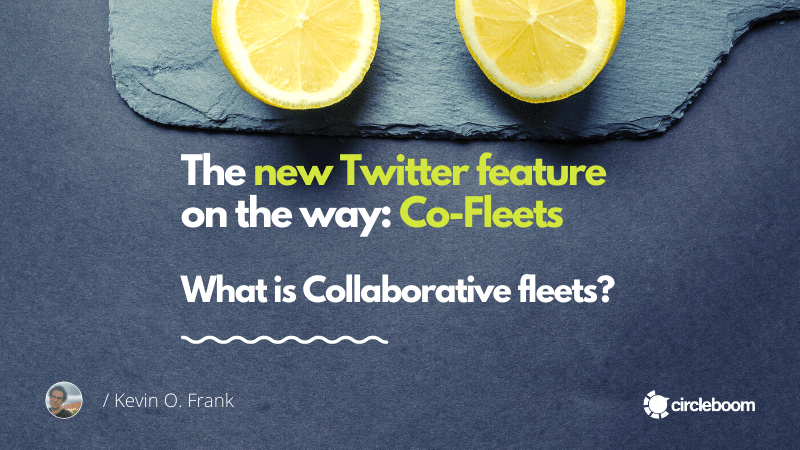 You've probably heard about Twitter Fleets a lot. What about incoming co-fleets of Twitter? Let us explain the possible groundbreaking feature of Twitter Fleets, collaborative fleets if you haven't yet.

Twitter Fleets were launched back on July 2, 2020, with some geographic limitations in Brazil, Italy, India, and South Korea. Therefore, Twitter might have change for testing and getting some pre-feedbacks before rolling Twitter Fleets globally. On November 17, Twitter Fleets has rolled out worldwide.

The interesting thing is that Twitter has launched collaborative fleets at the same time previously in July, however 'co-fleets' feature hasn't been announced yet.

What is 'co-fleets' in brief?

Collaborative fleets is a promising way to open up the interview method, real-time highlights of events, GIF wars, and more. Co-fleets will provide users a chance that they can initiate discussions within Twitter that are more confined and specialized.

Suppose we consider the common dissatisfaction in the technology market and among Twitter users for Twitter Fleets' standard features already provided by other social media platforms like Instagram, Snapchat, and Facebook. In that case, collaborative fleets seem quite promising with its possible features.

"This format may sound familiar to you! We've learned that some people feel more comfortable joining conversations on Twitter with this ephemeral format, so what they're saying lives just for a moment in time."

Thanks to collaborative fleets, two Twitter users will participate in co-fleets and create a fleet accessible for both users' followers. The feature is still in the test phase and hadn't been launched yet globally. However, once it is, co-fleets will make Twitter Fleets more useful and globally important.

It is already known that Twitter has been seeking new grounds to established new discussion options that can be transformed into private and public spaces for their purposes.

Kayvon Beykpour, the Twitter product manager, said during an interview he attended in October 2019.

"It's actually quite difficult to have a fireside chat when you have a billion people screaming into your ear. Like imagine we had tens of thousands of people in the studio with us right now, talking into our ear while we were talking to each other."

On the other hand, on June 17, Twitter has also released a surprisingly new feature, the ability to post audio tweets.

"Sometimes 280 characters aren't enough, and some conversational nuances are lost in translation. So starting today, we're testing a new feature that will add a more human touch to the way we use Twitter – your very own voice."

Twitter's point certainly helps today, with podcasts gaining space and people tending to social media in a contemporary way. Next to Twitter's other features such as going live, adding videos, and adding voice/audio will be a great step forward when it becomes available on all devices.

If Twitter were able to implement collaborative fleets successfully, it would be the first mover to add co-fleets as no other platform did. Especially, collaborative fleets may become quite important for various fields, from journalism to marketing. For instance, co-fleets may be used for various purposes like interviews, podcasts, and even talk shows and political discussion programs. It may seem utopic now, but if you consider Twitter is used even by formal governmental institutions and could witness internal and international conflicts conducted through Twitter. So, collaborative fleets may turn Twitter Fleets into a much more useful and globally important medium.

Co-fleets can also provide Twitter marketers and influencers with a perfect way to post as they don't want to share as a tweet. However, it should be considered that Twitter Fleet is at a very early stage. A worldwide deployment would make it easier to understand its embed into the present social media dynamics.