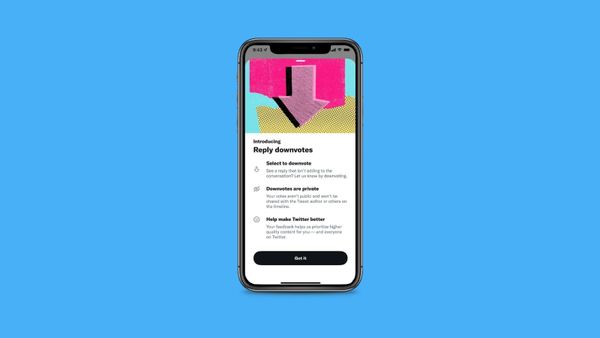 Starting from mid-2021, Twitter was testing a downvote tool with a small group of iOS users, and specialists stated that they were interested to see how a future rollout would impact the platform.

Some Twitter users interpreted this tool as a "dislike" button. However, Twitter stated that this was not the intent of the test.

Twitter responded in a statement to NBC News that they're testing the up-and downvote function to see if they're displaying the best replies for them in a conversation. This February, they made the Twitter downvotes function more widely available worldwide.

Many of us now wonder if it is possible to see downvotes on Twitter. The mystery and the theories have increased the curiosity for the possible new feature Twitter reply downvotes. In this article, we aim to make everything crystal clear about Twitter downvotes.

Twitter downvotes were previously only available to a small number of iOS users, but Twitter has announced that it will soon be available to iOS and Android users as well. Overall, counts for upvotes and downvotes aren't public, as on Reddit and YouTube, yet Twitter uses them behind the curtains to adjust the replies it shows users.

"... a majority of our users shared that the reason they clicked the down arrow was either because the reply was perceived as offensive, or because they perceived it as not relevant, or both."

It's possible that Twitter may make the Twitter reply downvotes feature permanent after this trial to enhance its algorithms and create the network better for people.

Twitter says that you'll see fewer similar tweets in the future, even though it's uncertain what that implies or how the company will determine what constitutes a similar tweet. Your downvote will be hidden from the creator of the tweet, and you will be unaware of any downvotes on your own tweets.

As being one of the first platforms that come to mind when it's about a dislike button, Reddit didn't miss the opportunity to show their reactions with a touch of humor;

How to Downvote Twitter Replies (and how to use them)?

Remember that the Twitter reply downvotes feature is still being tested. So, it is only available to a limited group of people. Also, the tweet's author will not receive any notification about your Twitter downvotes, and you are not able to see them.

Twitter Downvotes can be used only for replies, at least for now. So, to begin, click on any tweet with at least one reply. If a number appears to the right of the speech bubble icon on the bottom-left side of a tweet, it means it has received replies.

If you notice a down arrow in between the heart icon and the share button under a reply, you're a part of the Twitter downvotes test.

On many social platforms like Reddit and YouTube, it is possible to see the dislikes, but Twitter reply downvotes are not visible to the public. Other users will not be able to see what replies/tweets you have downvoted because your Twitter downvotes are only accessible to you.

So, in short, it is not possible to see Twitter downvotes.

Twitter clarified that the functionality is simply being tested for research purposes and that the votes would have no effect on the replies or their order. And, just like with previous Twitter updates, Twitter downvotes have also received mixed reactions.

Some view Twitter reply downvotes as a method to stop abuse, trolling, and spreading false information. Others are concerned that Twitter is handing over content management to its users, making it more straightforward for individuals to mute and avoid contrary and marginalized views.

For instance, as Facebook introduced emoji-based reactions in 2016, they inadvertently increased hostility on the network, according to some researchers. But as Twitter downvotes are not visible to the public, it is entirely another case.

"We are still in the learning stage of this experiment and are looking to gain a better understanding of how Reply Downvoting could help us better surface the most relevant content for people on Twitter in the future."

All the social media networks are working to make their platform safer and healthier for conversation. You have the right to mute a conversation, soft block, or block a person and report a tweet on Twitter.

There are also some theories regarding the unofficial Twitter shadowban.

Even though Twitter stated that they are testing the tool only for research purposes, it looks like they will roll out the Twitter Reply Downvotes feature to make the network better for its users.