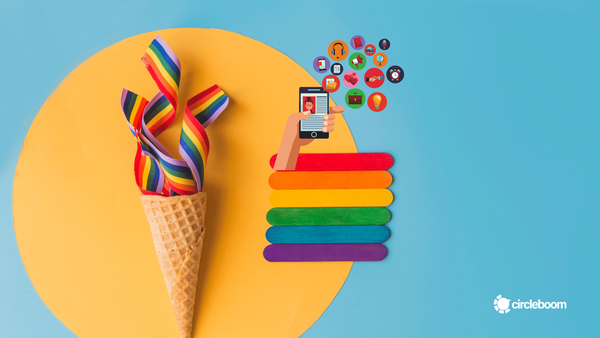 LGBTQ+ Impact: How social media evolves on the hands of Queer creators

While queer people are better represented today than closeted kids in the 1980s and 1990s, there is still a significant lack of LBTQ+ presence in mainstream media.

On the other hand, the impact of social media on marginalized communities, particularly the LGBTQ+ community, has been one of its most beneficial legacies.

As the mass media has created a constructed image based on stereotypes, social media facilitated several different characters to thrive.

Some of the primary functions, such as using social media as a friendly, relatable way to handle customer service or adding a touch of the public persona to your appearance, will continue to exist, there are indeed powerful new forces and functions available to harness for brands who would like to leave a mark in their lifetime.

In this context, influencers of the digital world can be seen as more prominent than traditional celebrities, particularly in online contexts, where they are more trustworthy and approachable.

And considering influencer marketing in hand, companies hope that consumers would be more motivated to try their product or service by introducing relevant “influencing” people to their target markets.

When the calendar indicates the Pride month as of June, the same methodology applies to LGBTQ+-related projects such as product collaborations, visual campaigns, content marketing, and influencer marketing.

Social media as a means to… tell what?

For instance, according to Twitter survey from 2020, 79 percent of Twitter users believe marketers have a good chance to make a difference by advertising on the platform.

And here comes the new generation content generation, the ways of telling a purpose and impact society, market, or audience - you fill in the blank, and diverse tastes and niches of content creators and influencers. User-generated, unique content is the rising star on each social media platform by all means.

Do you see it too?

Users-i.e. we, all of us- love to see and comment on what other users share; hence, the user-generated content. It gives individuals a kind of laissez-faire attitude.

And if we are talking about user-generated content, Queer Creators and Influencers are no exception…

While the term of influencer comes a bit mundane after too much exposure, the main thing to catch here is the ability to “influence” and impact rightful purposes.

Upon embarking on Pride month, Twitter has conducted an insightful interview with three queer content creators, namely, Matt Bernstein (@mattxiv), Fran Tirado (@fransquishco), and Raquel Willis (@RaquelWillis_) in which they offered valuable insights on how content creation is evolving, and it should be through an inclusive perspective.

Raquel has held important positions during her career, including Director of Communications at The Ms. Foundation, editor in chief in Out magazine, and nationwide organizer for the Transgender Law Center (TLC).

She is a thought leader who uses digital activism as a primary tool of opposition and emancipation.

His work supports LGBTQ+ communities and has won Brooklyn’s 30 Under 30 list and the Stonewall Foundation’s Vision Award.

Fran works on strategy for firms such as Netflix, HBO, Instagram, Microsoft, Mailchimp, and Google, revealing how these major media and tech organizations value a diverse approach to content creation.

He combines hotly debated and profound statements with beauty.

Bernstein, a senior at New York University, majoring in photography and journalism, first utilized Instagram to display his wonderful pictures of queer themes and gatherings.

Since then, he’s altered his focus to include his passion for beauty and makeup while maintaining his social influence.

Publishing rainbow-colored brand logos annually can seem quite a lazy capitalist company movement to some circles. Yet, the time spent embracing and even normalizing this act would never be the same without digital advocates, activists, and queer influencers on social media.

Matt also states during the interview that the branded content that is actually created by the LGBTQ+ community is quite distinguishable.

And it is possible to argue and suggest that brands should consider hiring queer creative writers, marketers, and strategists to seek out-of-the-box opinions and empower the company if they are serious about advocating equality.

Queer content creators – indeed, most of the community members are digital-savvy- are prominent figures when we look at their success in managing visibility, digital campaigns, donations, and leading opinions.

Brands have a lot to learn them from and have multiple grounds to collaborate with them.

As Raquel mentioned, these collaborations should be year-round rather than Pride initiatives.

Looking from a broader perspective, the picture suggests that end-users become increasingly exposed to the self-generated content of the queer community each day, and; hence, devoting all visibility to Pride content will not be enough.

Throughout the last decade, most Twitter users have become used to the #Pride hashtag that pops up on Trends each June.

This digital act is now turned into a standard, even an expectation from public individuals and brands to create content on this hashtag.

Thanks to all individuals who participated in this embracement, it is a far cry from being an offbeat media campaign.

Along with that, Instagram annually presents certain popular hashtags such as #lgbtq, #bornperfect, #equalitymatters, #pride, or #accelerateacceptance in colorful forms and aims to boost their usage in Stories.

For end-users, it is now possible to change the trending topic and enforce brands or any other authority to take action on a specific topic.

Like Instagram’s approach, Twitter live hashtags and utilization of them (take a look at hashtag search tools, for instance) in the hands of queer content creators paved many ways to achieve objectives such as awareness, donation, protest.

Curated #Pride collections from businesses started and led by LGBTQ+ communities are promoted on Facebook and Instagram.

And purchases from these businesses, which include donations of proceedings to LGBTQ+ specific NGOs, are also available in-app checkouts. (Similar ambitions in our mind, check out our Nonprofit collaboration to support our efforts for facilitating different voices worldwide.)

No more a need for defined gender roles on social media

Again, looking at basics, even though changing a feature- a button maybe- on an app may seem like a little effort, some changes can mean the world.

And they allowed adding expressions like Gender Nonconforming. While it is a single tap at all, it could not be imaginable a decade ago.

A Genuine and Inclusive Brand Presentation Need has emerged

Considering social media and the internet are vital to change the way we think – and there is still a way to go ahead; another contended issue is how brands on social media and real-life can become inclusive and sustain this stance throughout all year and in all practices.

While the brands that are open to constructive feedback work on ways to consistently represent Pride initiatives, Fran also highlights that when the LGBTQ+ number increases, it reflects on multiple perspectives.

And it will be safe to say that this reflection of multiple perspectives applies to the content created, an ad copy written, and branded content.

While queer community-led content alters how people use social media and act on social media each day, the brands may consider working on their social media strategies and even doing it with strategists from the LGBTQ+ community.

As highlighted in the interview, to achieve this, companies need to adopt democratized hiring practices, act and think pluralist, and make an effort to stay consistent in this regard.

Why is this important, you ask?

LinkedIn has initiated the #ConversationsForChange series to tell the diverse experiences of LGBTQ+ professionals worldwide.

Their research also revealed that one-fourth of survey respondents stated they hide their identities at work.

Another 25% of working individuals have been stated that they have been overlooked or purposefully passed up for career advancement chances.

Influencers are crucial in the queer community because they create, curate, and spread content that maintains and strengthens their culture.

These celebrities have released touching coming-out videos, dedicated their time and talents to charity causes, and established themselves as a lighthouse for anyone in the LGBTQ community who has felt invisible or unheard.

Pride means and should mean more than a parade. It is an opportunity to act openly without fear or shame.

And even if we cannot take Pride to the streets this year due to social distancing rules still applied in most of the world, companies that aim to benefit from Pride campaigns for their brand perception can still do a lot.

Besides establishing creative and viral content in social media, these works can be devoted to supporting their LGBTQ+ employees and the community to make them feel welcomed, included, and listened to!