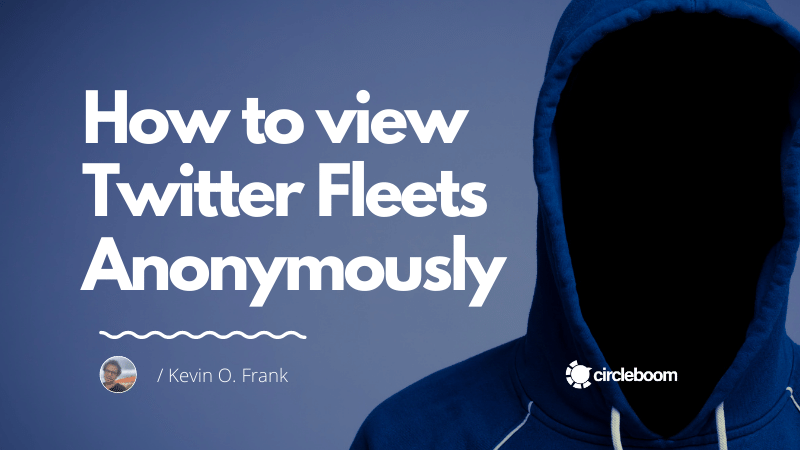 If you have already, don't you wonder about to view Twitter Fleets without anyone knowing it?

If you do, let's check out our detailed article about Twitter's latest feature, Twitter Fleets.

Since November 17, Twitter Fleets became available worldwide. However, it is still unknown to most of the Twitter users as a brand new feature.

So, let me fresh our mind briefly, what is Twitter Fleets? Then, I continue to point by point.

And this feature may relive and let people free who like to share their thoughts with knowing that all those will have been deleted in 24 hours and will not stick forever on them.

Twitter Fleets is an exciting way for Twitter to connect. Text, images, videos, and everything else can be uploaded. Above all, it is all temporary and should not lead to unnecessary talks.

Note: Twitter keeps staying on the safe side both for itself and its millions of users. Twitter rules are available for the Twitter Fleets as well.

"... please note that we maintain a copy of all sent Fleets for a limited time after they expire or are deleted to be able to enforce against Fleets that are found to violate our rules. If a Fleet was found in violation, we may extend the time we maintain a copy of it to allow people an opportunity to appeal the violation if they believe it was a mistake."

The feature has been announced very recently that it became available worldwide. So you don't have to do anything to enable Twitter Fleets for your account.

It is enough to keep your Twitter app up-to-date to get Twitter Fleets on your mobile devices.

Note: Twitter Fleets can be found on Twitter Android and iOS apps for now. Feature for Twitter Fleets on desktop or web versions is not available yet.

Once someone sent a Twitter Fleet, Twitter tells them who has viewed, simply who engaged. You can't see fleet anonymously.

At the same time, it is quite an understandable thing that sometimes you might want to view a Twitter Fleet without anyone knowing or anonymously.

For instance, let's consider you are conducting a marketing strategy through researching on Twitter.

You want to check in a competitive brand's Twitter marketing strategy and may prefer to keep that hidden.

Step #1: Open the Twitter app on your mobile device.

Step #2: Let Twitter Fleets on top of the Twitter timeline load. Once loading is done, turn off the Wi-Fi and circular data of your mobile device. tap on another Fleet next to the actual one.

Step #3: Once the internet is turned off, you can freely view the Twitter Fleets you want to do. Swipe it to the Fleet's direction that you want to view without seen.

Step #4: When you have watched all those you wanted to view without anyone knowing, you can turn on the internet again and close the app.

Another Method to View Twitter Fleets Without Them Knowing

Via this way, you can swipe between the various Fleets of users using the interface without them knowing.

Step #1: Check the Twitter Fleet you want to view anonymously and tap on another Fleet next to the actual one.

Step #2: Tap on the Fleet to pause it, and slowly swipe it to the Fleet's direction that you want to view without seen.

Note: While doing that, you should be careful because if you swipe all the way will see that you have viewed it.

In case you would like to find out how to spot and remove your inactive friends and followers on our video tutorial, here it is:

All in all, Twitter Fleets may be a breakthrough for B2B marketing.

It provides an opportunity to communicate media messages that brands and influencers want to follow but tweets.

Here you can freely be checking Twitter Fleets without letting anyone know where you are looking at.

However, it does not mean the feature that we show you won't be patched or fixed soon by Twitter.

So enjoy taking advantage of this trick to do anonymous marketing researches on Twitter.