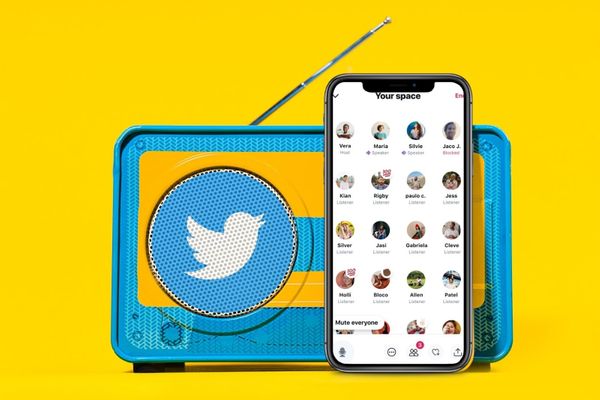 Audio streaming has been on the rise nowadays, especially with Clubhouse take over recently; I am sure you have heard of it, maybe still waiting for an invitation.

In December 2020, Twitter introduced a new project called Twitter Spaces to bring a layer of connectivity to Twitter which is often lost in the text. They have been working on developing Twitter Spaces since then.

Twitter started testing the tool with a very limited group, and Twitter Spaces was launched in April 2021. Now, they offer the ability to host a Twitter Space to all accounts with 600 or more followers on Twitter.

Wanna start your room on Twitter Spaces and don't have 600 followers yet? Don't worry, you can get more followers and increase your reach with Circleboom. You can get started for free to schedule and manage your tweets, learn detailed background information about your followers and friends, and use the User Analytics tool to explore your target audience.

As a justification for this limitation, Twitter says that they observed that these accounts are more likely to host good quality live conversations due to their existing audience based on their experiences so far. Their goal is to learn more on the road before bringing the ability to host a Twitter Space to everyone.

When someone on your following list starts or talks in a Twitter Space, you will see a purple bubble at the top of your timeline as long as the Space is live.

Just like in Instagram Live Stories, you can tap and join as a listener, and you can react with emojis. What is more, you can Tweet or DM the Twitter Space, send a request to the host to speak, check out the pinned Tweets and catch up with the captions.

You can also join Twitter Space as a speaker. Besides your ability to talk in Space, you can also turn on captions to help listeners follow your speech and Tweet the Space link to invite your followers to the Twitter Space.

If you have a topic on your mind, you can host a Twitter Space and get control of the subject being discussed and who’s speaking. You can invite people, even those who do not follow you, via sending them a direct link, sharing the link on another platform or simply tweeting it.

To protect the safety of its users, Twitter has built-in safety controls for hosts and speakers. When you are the host, you have the means to mute speakers, take away their mic options or remove them from your Twitter Space completely. Also, as the host, you can mute all participants at once.

You can also use Circleboom’s The Circle tool to detect spammers, fakes, inactive and overactive accounts on Twitter to make it a safer and cleaner place for you. It will also help you increase your Twitter followers as a good follower/following ratio can attract more followers.

It is the same way as you write a Tweet. On iOS, long press on the “compose” button and then you will see the new “Twitter Spaces” icon (multiple circles in a diamond shape).

You can also start Twitter Spaces like you are creating a Fleet. Tap on your profile photo, scroll to the far right and tap the Spaces option. When you feel ready to begin, click Start your Space.

The host can end a Space by clicking Leave in the top right, which will end the Space for everyone. After a Space comes to an end, users won’t be able to see it anymore.

However, Twitter will keep a copy of the audio and captions for 30 days to review the content for any violation of rules (If an appeal is filed, the period will be extended to 90 days, and hosts will be able to download the data).

When you join Twitter Spaces, you can minimize the Space and continue using Twitter. Even when you exit the Twitter app, you can continue listening to the audio.

Twitter Spaces is still at its early stages but growing. Here are some work-in-progress features Twitter has mentioned in recent days.

Twitter is working to make it possible for the hosts to get monetary support as they provide exclusive content to their Twitter Spaces listeners. Hosts will be able to set a ticket price and how many tickets are available for this exclusive Ticketed Space. The hosts will earn the majority of the revenue, and Twitter will keep a small fee as well.

It is for sure that we will see many interesting and attractive topics in Twitter Spaces. To catch up with our faves, the users will be able to schedule and set reminders for upcoming Twitter Spaces in the coming weeks.

Co-hosting with other users can help you to manage speakers and participants. Also, when you need to leave the Twitter Space, you will be able to pass hosting to one of your co-hosts.

Twitter is working on live caption improvements such as pausing and customizing options and making them more accurate to make Twitter Spaces more accessible for people with disabilities.

Clubhouse has come into our lives, and the impact of it was huge. It is for sure that social audio is not going anywhere. It seems like Twitter Spaces will take audio chat to the next level with so many possibilities.

Twitter has already had the means as it is an established social media platform with a huge user base. Also, you do not need to receive an invitation from an existing user; Twitter Spaces are open to all listeners.

It is obvious that Twitter Spaces are coming with full strength and its features are very promising. Now, the question on all the marketer’s mind is how to integrate Twitter Spaces into our Twitter marketing strategy?

What we expect is that we will see many Q&A sessions, live events & shows, product releases and giveaways. If you are searching for how to make money on Twitter, you can also check out our guide.

Starting from the 3rd of May, it is only available for Twitter users with more than 600 followers. We are very excited about the feedback and updates. You can follow Twitter Spaces to stay tuned with the updates.